Cruise with Me on the Blue Danube

We have been given 2023 pricing until the 2024 pricing is released to the public, which should be within the next month.  Lock in your pricing now with a $400 non-refundable deposit per person. 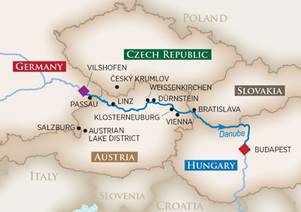 From Strauss’s The Blue Danube to Mozart’s Linz Symphony, the Danube River has inspired countless musicians throughout the centuries. Their famous melodies are carried on the river’s current, which you’ll follow through some of the most spectacular capitals – Budapest, Hungary; Bratislava, Slovakia; and Vienna, Austria – where they lived, composed and performed, as well as to cities such as Salzburg, Austria, where Mozart was born. Along the way, you will be treated to a variety of live performances by renowned musicians that are sure to fill your heart with love for the Danube throughout the ages. Whether you are a musician yourself, a classical music connoisseur or simply a discerning traveler seeking a nuanced and immersive experience, let the Danube River be your melodious muse on this incredible classical music themed journey.Day 1, EMBARKATION – VIENNA. Arrive in Vienna and board your luxurious river cruise ship. (D)Day 2, VIENNA. The “City of Waltzes” offers a treasure trove of gems and your city tour showcases them, including the majestic Opera House and the former Imperial Palace. Your tour concludes in the historic city center with a visit to St. Stephen’s Cathedral. Or if you prefer a more active tour, take a guided bike ride through Vienna. During the afternoon, enjoy leisure time to further explore this iconic city. Alternatively, visit a traditional café to experience a true Vienna specialty with its very own national holiday and a unique history to match: the rich chocolate sachertorte – and savor this treat with a piping hot Viennese coffee. During the afternoon, explore the city of music while following in the footsteps of world-renowned composers, such as Mozart, Beethoven and Schubert, from their past residences to museums to grand monuments. Or enjoy leisure time to further explore this iconic city. In the evening, join us for a very special live classical performance at a renowned local concert hall. (B,L,D)Day 3, VIENNA – MELK. Sail from the grand capital of Vienna to Melk on a morning scenic cruise. Explore the city known for its magnificent Benedictine Abbey, a UNESCO World Heritage Site and one of Europe’s largest and most revered monasteries. Within these walls you will find frescoes painted by Johann Michael Rottmayr and Paul Troger, as well as a famed collection of musical manuscripts. You will also enjoy the incredible acoustics of the abbey during a beautiful live choral performance. Later in the day, if you prefer a more active adventure, hike up to the Melk Abbey and then visit this magnificent Baroque monastery or join a guided bike tour to Melk. (B,L,D)Day 4, LINZ, AUSTRIA. Revel in a morning scenic cruise before your ship arrives in Linz, where you’ll have several choices of excursions. Opt for a full-day excursion to Salzburg where you’ll tour the historic center, lovely Mirabell Gardens, Residenz Square and the Old Market. You will also visit the museum at the famed yellow building known as Mozart Birth House and residence where the legendary composer was born in 1756 and lived until 1773. En route to Salzburg, stop at Mondsee, home of the Basilica St. Michael where the wedding scene from The Sound of Music was filmed. Or join a morning walking tour through the old city center of Linz and by the Mozarthaus where Mozart composed his Linz Symphony and Linz Sonata in only three days in 1783; or go on a bike tour of the city’s famed “Cultural Mile,” passing the contemporary Ars Electronica Center and the New Cathedral. In the afternoon, for those not taking the full-day tour to Salzburg, you can also choose to visit charming Český Krumlov, located just over the Czech-Austrian border. (B,L,D)Day 5, BRATISLAVA, SLOVAKIA. Take in the breathtaking scenery along the Danube River from your balcony or while up on the Sun Deck and even catch a glimpse of the gleaming Bratislava Castle on your way into the city. Host to the crowning ceremonies of 11 Hungarian kings and queens between 1536 and 1830, Bratislava certainly has earned the title “Coronation City of Kings,” as you’ll discover during your walking tour. Plus, enjoy a surprise musical performance as part of this included excursion. Or join a special “Tastes of Slovakia” tour. For a more active adventure, hike up to Bratislava Castle, offering magnificent views of the city or enjoy a guided bike tour, pausing to take photos with some of the celebrated statues in Old Town. (B,L,D)Day 6, BUDAPEST, HUNGARY. Celebrate the joy of music when visiting the beautiful Hungarian State Opera House, known for its neo-Renaissance and baroque décor. Discover where Hungarian classical music culture came to life as you walk through the backstage and on to the main stage, followed by a reception and small performance. You will then visit the Liszt House and museum, previously home to one of Hungary’s greatest composers and virtuoso pianists. Immerse yourself into the history of music as you will see a collection of pianos, portraits and personal objects of an influential pianist of the 19th century. (B,L,D)Day 7, BUDAPEST. Your city tour begins with going to both the Buda (hilly) and the Pest (flat) sides of the river. You’ll see Heroes’ Square and Castle Hill, home to the Fisherman’s Bastion and Mattias Church. If you prefer venturing off the beaten path or are returning to the city for a repeat visit, join our “Hidden Budapest” tour to discover some fascinating sites lesser-known to the average traveler. Whether heading to an underground church or AmaWaterways – Marketing Detailed Itinerary February 22, 2021 exploring Roman ruins, this excursion is sure to surprise and delight you. If you prefer an active excursion, you can hike up to Castle Hill for breathtaking views of the city below. (B,L,D)Day 8, BUDAPEST – DISEMBARKATION

CURRENT PRICING:  Pricing shown is per person, based on double occupancy and are based on 2023 pricing.  Once 2024 pricing is released, these prices will increase.

OPTIONAL – 3 DAY POST-CRUISE ADD ON:  Pricing will be available shortly.

DAY 8, BUDAPEST – DISEMBARKATION – KRAKOW. Depart the ship and enjoy a stop in Banska Bystrica before transferring to Budapest to check-in to your hotel. (B) Day 9, KRAKOW. Get acquainted with your surroundings and take a deeper dive into the fascinating history of Krakow with a comprehensive city tour. Visit the Wawel Royal Castle – the world’s very first designated UNESCO World Heritage Site and Poland’s largest castle, located in the center of its Old Town. The Wawel Hill it stands upon features a limestone cave renowned for its connection to the legendary Wawel Dragon of Polish folklore, which you will learn more about during your tour. You will also venture into Krakow’s historic Jewish Quarter and see the factory of Oskar Schindler, who was credited with saving 1,200 Jewish lives during World War II, and who was famously honored in the award-winning film Schindler’s List. You will also be treated to a live performance of the Polish anthem by a trumpeter on the highest tower of Saint Mary’s Church, otherwise known as St. Mary’s Trumpet Call, a tradition since the 19th century. Enjoy the afternoon at your leisure to explore more of the city. (B)Day 10, KRAKOW. Prepare yourself for an emotional day as together, we explore a darker period in Poland’s history with a visit to Auschwitz, the largest and most tragically infamous of Europe’s labor and death camps. The main gate, barbed wire fences, buildings and barracks look much the same today as they did during the Holocaust, when 1.1 million lives were taken within the camp. It was liberated from January 17-21, 1945, saving 58,000 from further horrors. Though not for the feint of heart, this once-in-a-lifetime excursion will honor the memory of those who perished and promises to be one you won’t soon forget. (B)Day 11, KRAKOW. Bid farewell to Krakow and prepare for your return flight home.